A geogrid’s intended use, and how it interacts with the soil layers around it, is far more important than its physical properties, when assessing performance.

However, while some geogrids rely on their tensile strength to provide a reinforcement effect, for stabilising geogrids, ultimate tensile strength alone is actually a poor indicator; their ability to stabilise a granular fill (the stabilisation effect) is a far more important factor in determining the performance of a road or working platform. 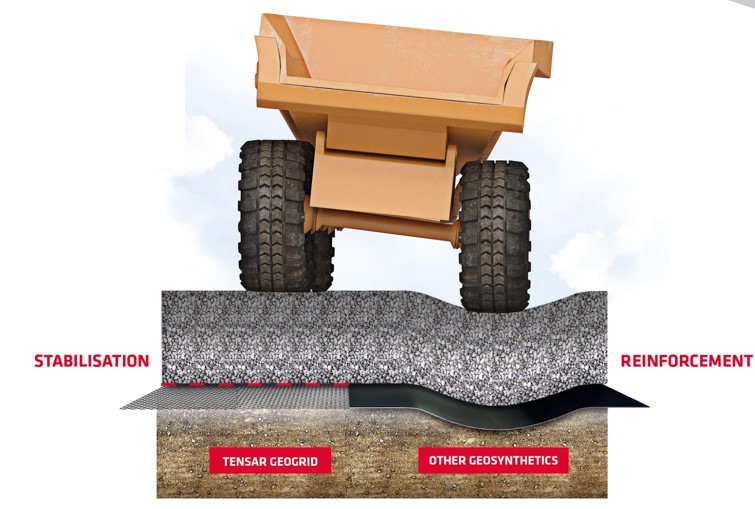 Reinforcement geogrids stretch when loaded, which can lead to deformation of the road surface.

As we have seen in previous blog posts, an aggregate layer incorporating stabilising geogrid performs as a composite, due to the interlocking mechanism and particle confinement that develops between the aggregate and the geogrid, preventing the lateral movement of the granular material.

The stabilisation effect can increase traffic capacity of the road, reduce pavement thickness or a combination of the two.

In this 'Keeping you in the know' video, Jonathan Cook explains why the tensile strength of geogrids is irrelevant when they are used to stabilise granular layers in roads and temporary working platforms.

Rather than the physical properties of a stabilisation geogrid, it is its effect on the granular fill placed and compacted on top of it to form the road layer that needs to be applied, to allow the benefits to be quantified. Stabilisation Factors, derived from extensive full scale trafficking trials and project experience, are applied using Tensar’s bespoke roadway design software.

TensarPave7 roadway design software developed by Tensar calculates the benefit of using a Tensar stabilisation geogrid in both unsurfaced and surfaced roads, catering for both construction phase and in-service traffic loading.

What this demonstrates is that geogrid performance should always be considered as part of an overall system—the benefit is in how the geogrid interacts with the layers around it. That is why a geogrid installed to stabilise the ground beneath a road, or to stabilise a working platform, requires different characteristics to one used to reinforce a retaining wall.

Also, make sure you take part in our next Tensar Academy Webinar, The Road to Stabilisation – The Evolution of Tensar Geogrid Technology, which will be held on 24 September at 11am BST.
Book your place here.