CBR values and why they matter

Aren't we beyond CBR testing now?

Why do I still need a CBR value when my road foundation design is based on modulus?

Forget soil for a moment. Instead, imagine that you’re baking a cake, and think about sweetness: you are interested in how sweet the cake will be and this will depend on the amount of sugar you put in. The measurement scale you really need is ‘degree of sweetness’, but that’s difficult as you don’t have a method or the equipment to do so. This means you need to follow the recipe, and if it’s an old recipe book, sugar is measured in cups! You don’t have a ‘standard’ cup so you look up a table converting cups to grammes and you do have weighing scales. Voila!

Notice we worked from grammes (a weight), to cups (a volume), to predict a degree of sweetness (difficult to measure). We trust that the recipe author knows the relationship between volume of sugar and sweetness of the cake and that the conversion chart correctly correlates loose volume to weight. Enjoy your cake! What has this to do with CBR values?

So far so good, but CBR testing is a little difficult and the results vary greatly with moisture content. The design value should equate to the ‘equilibrium’ moisture content, which is the condition expected during service life of the road foundation, and it is going to require some calibration and estimation. Although the equation to convert CBR to modulus seems very neat and precise, the input value of CBR may be anything but precise.

CBR testing is rarely carried out during a regular site investigation. Instead, a CBR value is usually obtained indirectly from another in-situ test, such as the plate load test (PLT), or the dynamic cone penetrometer (DCP) test. Calibration charts enable conversion of penetration results to CBR value. Then from CBR we use the equation to estimate subgrade surface modulus. Just like from weighing scales, to cups to sweetness index. 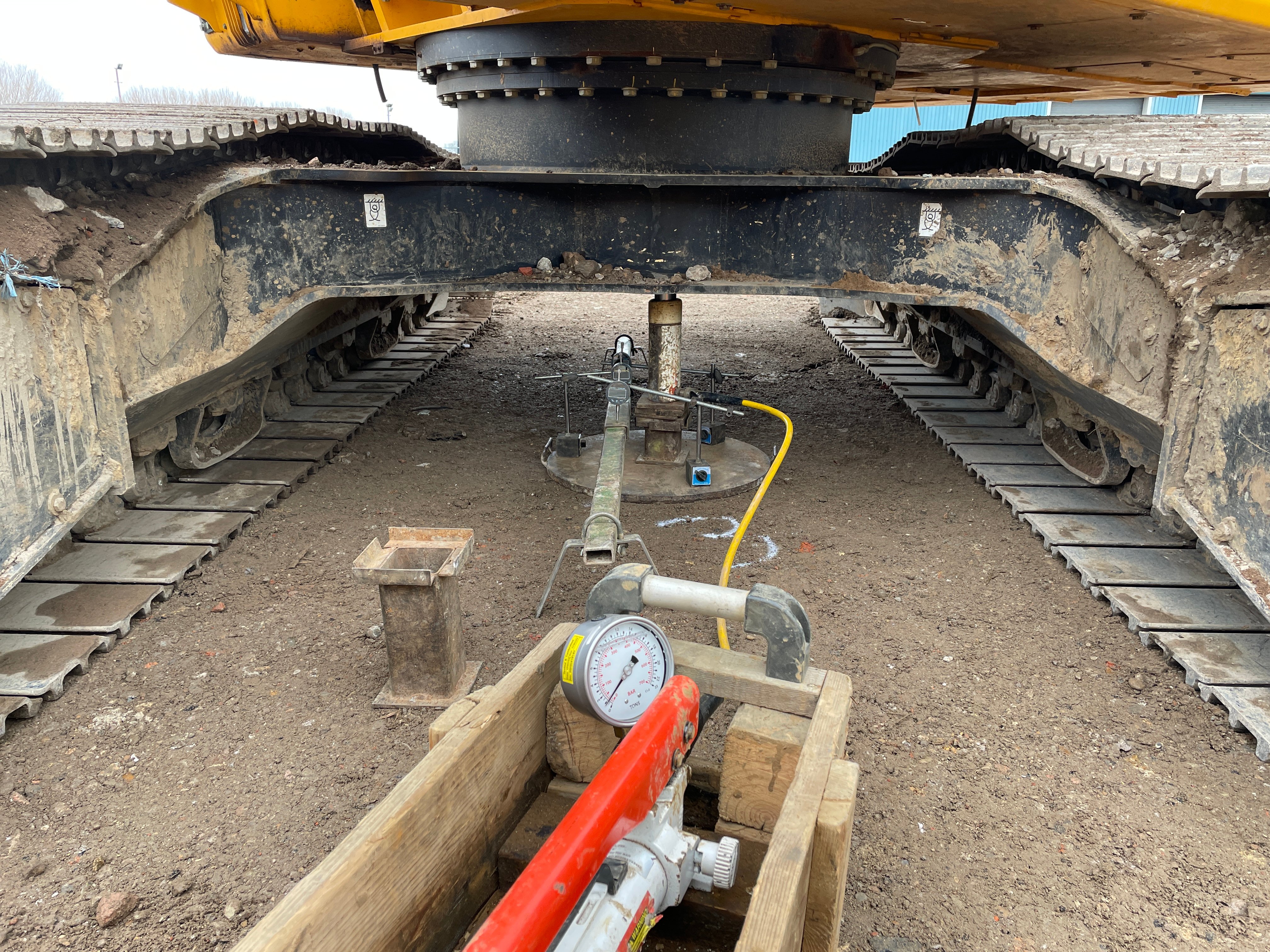 Why do we still use CBR values for road design?

Despite most national road foundation design methods being based upon subgrade surface modulus, this parameter is rarely measured directly on site and CBR values are typically the route to estimating a modulus value.

The physical properties of a soil control its strength and stiffness. The relationships between these properties are complex and not fully understood. The CBR test, first introduced in the 1930s, has stood the test of time and is generally accepted to be a practical and cost-effective measure that gives an indication of both strength and stiffness.

Highway engineers and geotechnical engineers have become familiar with CBR as a measure of subgrade strength, to the point where many engineers can give a good initial estimate of CBR on site by pressing a thumb or heel into the subgrade surface. There is an accepted lack of precision with site CBR measurements that gives confidence to experienced engineers for them to estimate a CBR value. In contract, quoting a shear strength value in kPa implies a degree of exactness that may be absent from the reality. Charts are available to allow estimation of CBR value based upon a description of soil type, construction condition and moisture condition. CD225 allows use of Table C1 from LR1132 to estimate CBR value for foundation design where no CBR measure is available. 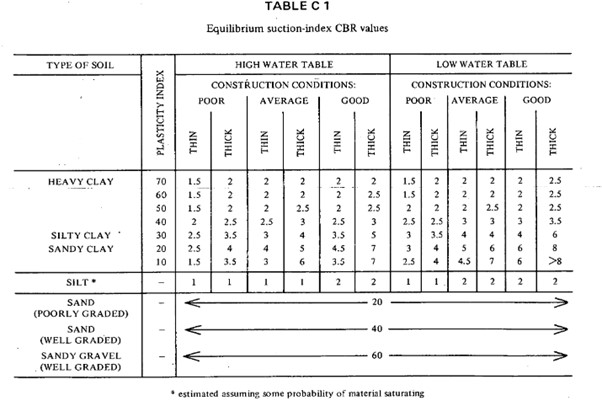 Because of its longevity, the results from many other soils test have been calibrated to equivalent CBR values and good engineers have a concept of this. CBR therefore provides a common scale, understood by all and adopted as a common input value for various design methods.

How is CBR calculated?

CBR values should correctly be expressed as a percentage, e.g., CBR 2.5%. The test compares the penetration resistance of the tested soil to that of a standard high quality compacted granular material. The result is a ratio which is then multiplied by 100, to generate a percentage value.

What is a CBR value?

CBR is the ratio of force required to penetrate a soil mass with a standard circular piston to a specific depth at the rate of 1.25 mm/min., to that required for the corresponding penetration of a standard material, expressed as a percentage. It provides a valuable estimate of soil strength and surface stiffness suitable for use in road foundation design.

What is CBR testing?

The California Bearing Ratio Test (CBR Test) is a penetration test developed by California State Highway Department (Caltrans) for evaluating the subgrade soil for the design of flexible pavements and since its development, it has been widely adopted internationally.

The test procedure consists of forcing a 50mm cylindrical plunger to penetrate the test material at a rate of 1.25mm per minute. The load at 2.5mm and 5mm penetration are recorded. The loads are then expressed as a percentage of a standard load obtained from identical testing of a standard, high quality granular material. This is then referred to as the CBR value.

The test can be conducted in-situ - when account must be taken of the effect of seasonal variations in moisture content - or tests can be carried out in the lab on undisturbed or remoulded samples compacted at the appropriate moisture content. Laboratory testing can simulate the subgrade moisture content and level of ‘disturbance’ expected on site during and after construction.

How is CBR normally measured on site?

CBR tests involving penetration of standard cylindrical plunger are rarely conducted as part of a standard site investigation. Instead, alternative test methods are used and the CBR value obtained using correlation charts. As mentioned above the alternative test methods most commonly used are DCP or PLTs. Correlations between these test values and CBR values are well established and widely accepted.

Does CD225 use CBR values for design?

The UK Design Manual for Roads and Bridges CD225 – ‘Design for new pavement foundations’ proposes a restricted design method based upon the design subgrade surface modulus, which is taken as the lower of the surface modulus values during construction and when a state of equilibrium is reached in service.

CD225 then requires that the equation below is used to convert CBR value to subgrade surface modulus.

The equation is limited to CBR values between 2% and 12% and soils of maximum particle size of 20mm.

Although the use of CBR values is proposed, the use of a CBR test is not a requirement. Alternative in-situ test methods are accepted that can be correlated to CBR values. Cone penetrometer testing is specifically mentioned in LR1132.

Additionally, there are alternative in-situ tests that can measure modulus values such as the falling weight deflectometer (FWD) tests and light weight deflectometer (LWD) tests. The latter equipment is handheld and can be correlated to the FWD equipment to improve accuracy. These dynamic tests are less common but provide a more direct measure of the modulus value of the subgrade, which aligns with the CD225 methodology for highway foundation designs.

CD225 notes that subgrades with a design subgrade surface modulus lower than 30 MPa are unsuitable to support construction of a pavement. That equates to a CBR value of approximately 2%. Below that, subgrade replacement or subgrade improvement is necessary. CD225 includes mechanical stabilisation using geogrids as one suitable option. Tensar can provide specific advice on the use of Tensar geogrids for mechanical stabilisation over weak and variable subgrade soils. We can also calculate a surface modulus at the top of the subgrade improvement layer, to demonstrate a surface modulus above 30MPa, that will be suitable for the pavement foundation layer. This calculation can be based on CBR results, or the results of alternative testing methods (such as FWD & LWD tests). 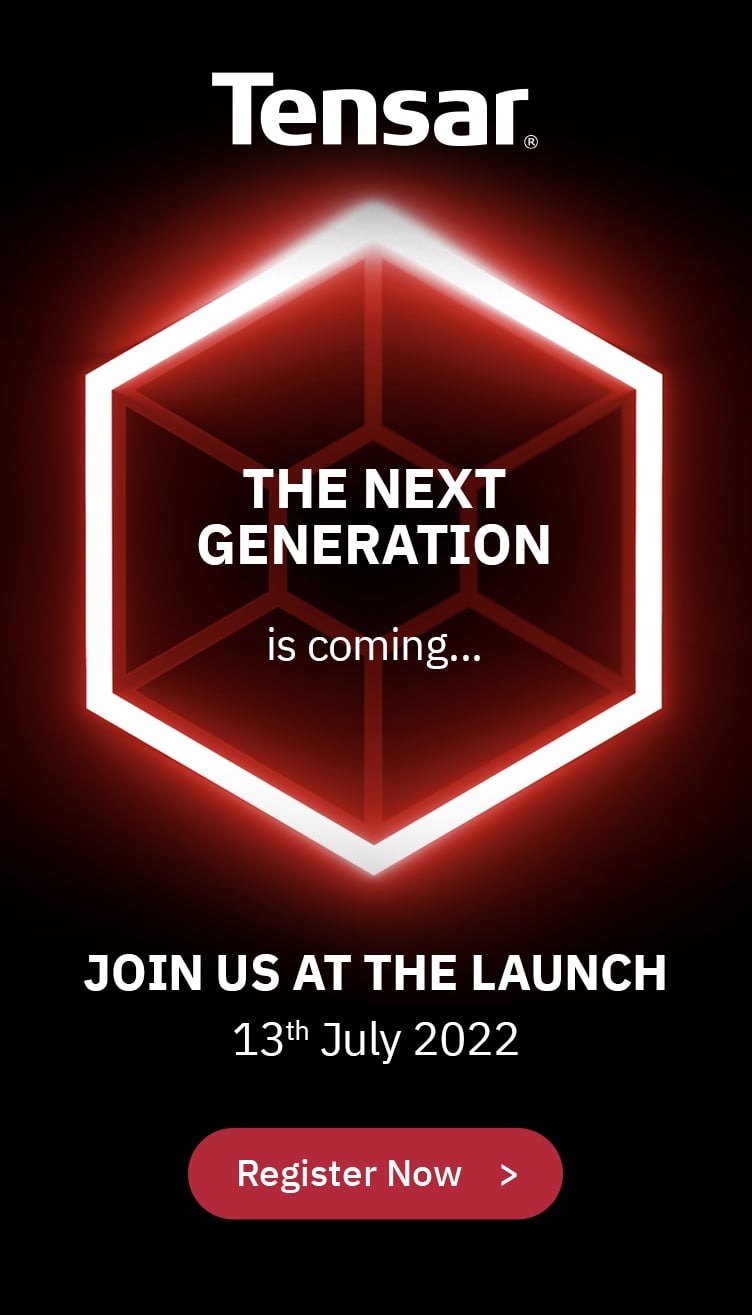