Innovative Engineering – The Genesis and Continual Development of Geogrids

As with most great ideas and products that we now take for granted, geogrids began in a small way, and have come a considerable distance to reach the level of acceptance and utilisation we see today.

In the early 1970’s, extruded polymer mesh structures – the brainchild of Dr Brian Mercer - were being increasingly utilised in civil engineering applications, and were clearly the genesis of the geogrid. Later in the 70’s, integral punched and drawn geogrids were invented by Dr Mercer. These were stronger and stiffer than the earlier meshes, making them more suited to infrastructure works, and they began to be deployed early in the 1980’s. Dr Mercer continued his research and his ground breaking work, developing more complex and effective versions of his initial designs. These early versions of stiff polymer geogrids, with integrated junctions, were obviously the basis of the geogrids used so frequently cross the sector, today.

In 1978 Mercer filed for a patent on his integral oriented polymeric grid which he called Tensar®. Intended for earthwork and other demanding geotechnical applications he also coined the word “geogrid.” The first use of a Tensar geogrid was for a retaining wall at a colliery in Yorkshire supporting rail cars carrying mine waste. Obviously, before any new technology can be accepted and used in building and construction projects, it needs to be tested and approved as safe in every way (production, development, transport, installation and long-term, sustainable use). For a new product no bank of tests or years of proof can be exhibited, and this can make it extremely difficult for innovative solutions to gain acceptance. 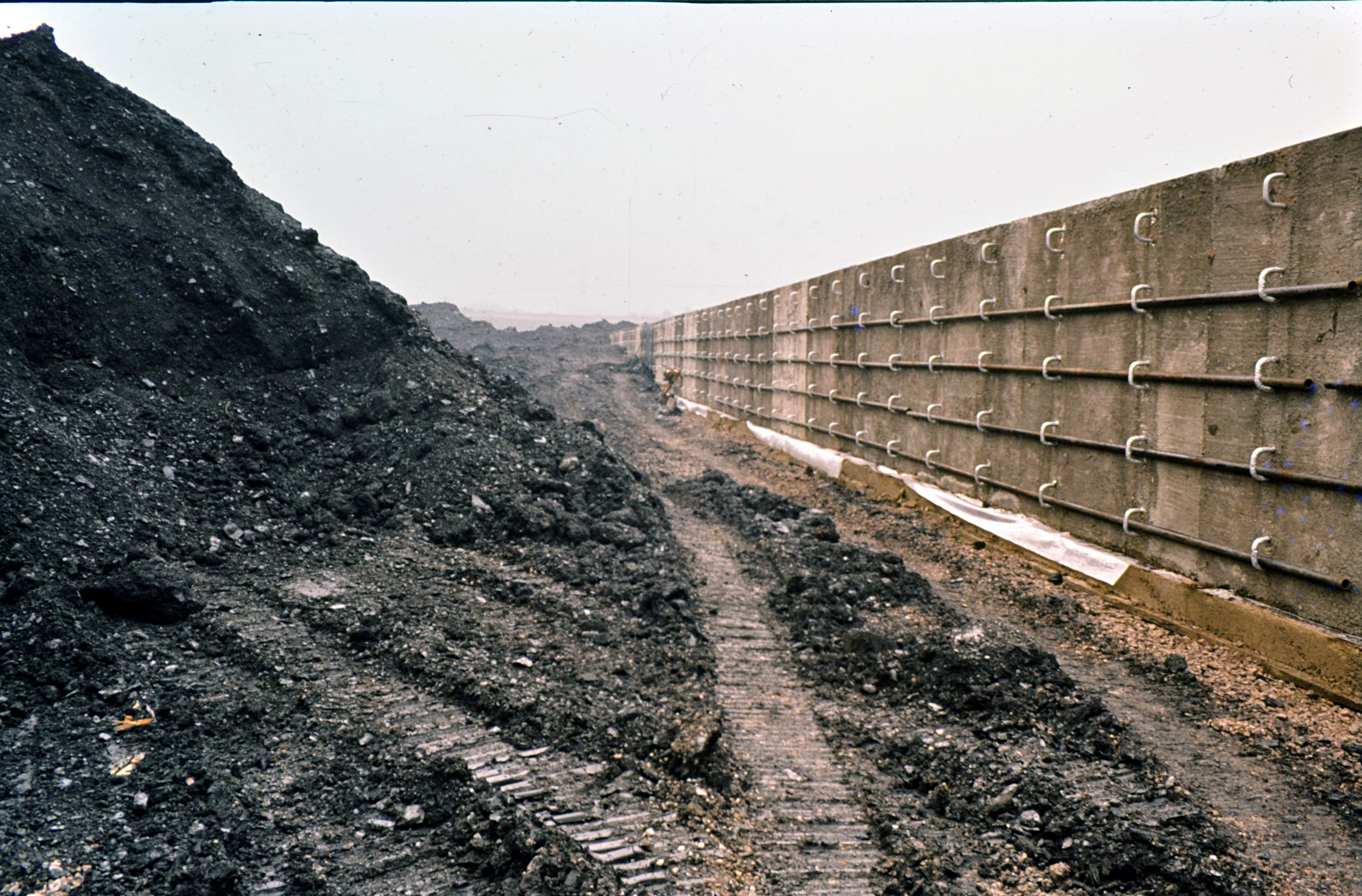 Tensar geogrid were first trialled at Silkstone Colliery, Yorkshire in 1980

In 1984, a number of interested parties came together at the first geogrid symposium, to consolidate years of work and rectify the lack of data and information required to prove the safety and efficacy of this new technology. Universities, consultancy firms, research groups, county councils, professors and scientists contributed research and data to the growing body of information that would be required to allow the use of geogrids in its practical application.

As no test methods had been available for these new materials, new testing regimes were established, drawing on the knowledge of all these stakeholders. They developed and implemented innovative new tests to support their application in walls, pavements, slopes and asphalt. Design and construction details were shared to encourage use of the materials and the new structural applications. At the 1984 symposium, the growing body of work demonstrating the testing and data around geogrids was presented. The technology and its associated products – as we know it today – became recognised, and began its evolution based on this symposium, and its contributors.

The next step in the development of the geogrid industry was to leverage the test data and gain acceptance – specifically, initially, formal approval by the Highways Authority, for the construction of geogrid reinforced soil walls and bridge abutments. This was begun in 1984 with the formation of a BSI committee and although an inevitable conservative leaning towards concrete, steel piling and other traditional methods continued, geogrids began to be accepted across the sector. Identifying the importance of a definitive document recognising and fomalising guidance on the deployments of geogrids, a formal Code of Conduct was developed although this was to take 10 years and numerous changes in structure and direction, before the ultimate finalisation of BS8006 (1995). The publication of BS8006 added credibility for the products and created increased confidence across the industry, not just in vertical walls and steep slopes, but extending the applications to other reinforced soil options.

Usage in the UK began to offer proven data, and positive feedback for geogrid reinforced soil structures in the US was available by the late 1980s, then internationally, recognition increased significantly following the Great Hanshin (Kobe) earthquake in 1995. Conventional, reinforced concrete structures experienced significant damage from the earthquake, which registered above 7.0 on the Richter scale. The geogrid reinforced walls, however, were the subject of numerous papers and reports, all of which agreed that this technology offered superior protection and suffered considerably less damage.

The Tensar technology continued to evolve with further investments and innovations both in the UK and US. New products and applications were developed in the marine, mining, waste containment and other markets. Improvements were made in engineering practices, designs and software. Continuous improvements in manufacturing further contributed to the Tensar success story.

Over the years ongoing research, field testing and trafficking trials, have expanded the base of geotechnical knowledge about the properties, performance and use of geogrids. In 2003, Tensar UK patented the revolutionary TriAx® geogrid with its hexagonal grid structure, triangular apertures and higher profile strands. This product has different properties and performs better than the older-generation biaxial geogrid. 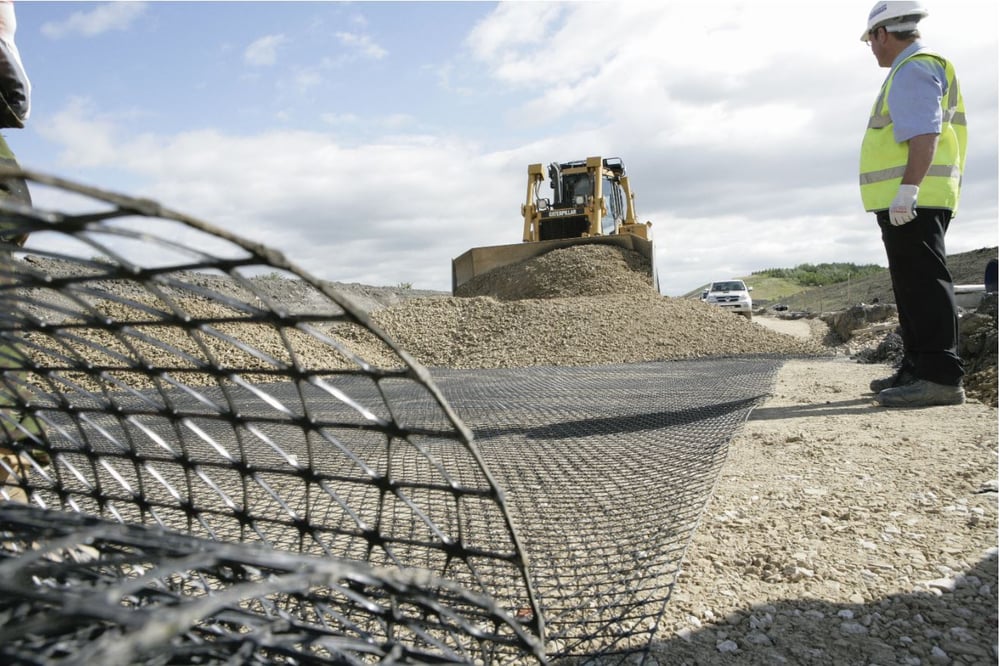 Tensar technologies have been used on large construction sites and prestigious projects around the world, such as the Panama Canal and the largest ports in the United States, the Channel Tunnel project, and several of the artificial mountains at Disney theme parks. Tensar TriAx geogrids reinforce the ballast under the high-speed rail system in China and support hundreds of miles of rail track in the US, Europe, Australia and Asia. Deep underground in mine shafts around the world thousands of workers are protected every day by Tensar grid roof support systems. Our products and technologies are everywhere…you just can’t see them!

Building on over 40 years of experience, Tensar continues to develop products for the current market and is proud of its heritage as well as its latest offerings. The question has to be, though: what’s next for geogrid technology? What will be needed, researched, developed and produced?

The answer is: Tensar will deliver – watch this space…