The Sheikh Khalifa Highway, also known as the Dubai-Fujairah Freeway, is a key route in the United Arab Emirates, running east from Dubai to Fujairah City on the Gulf of Oman. The 45km long, four-lane highway, which passes through the mountains of Fujairah, opened in 2011, halving the journey time between the cities. 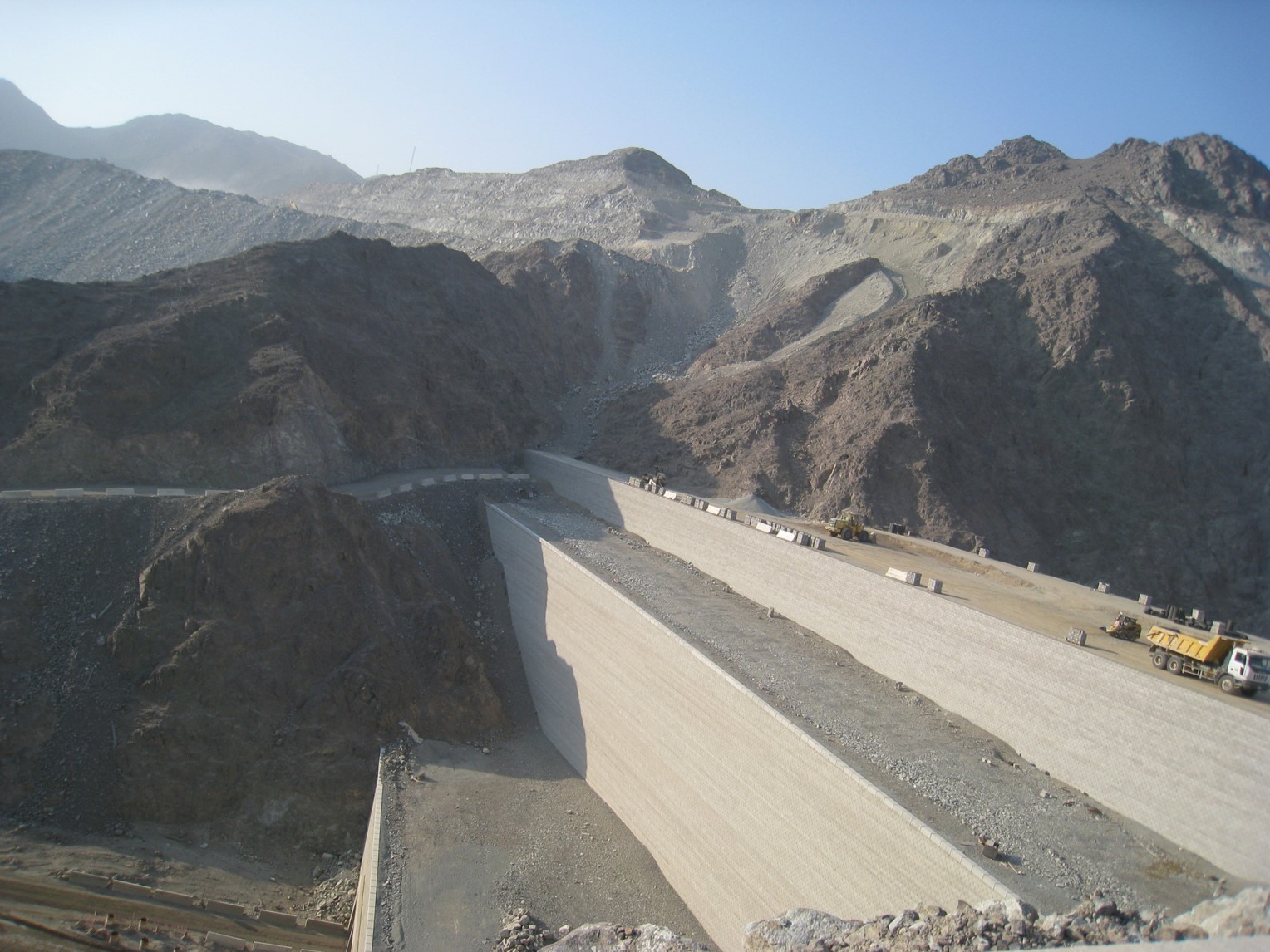 The Sheikh Khalifa Highway, also known as the Dubai-Fujairah Freeway under construction.

Construction involved excavating cuttings in excess of 100m in height using drill and blast and crossing deep ravines formed during intense rainfall in the winter months. Building bridges to carry the four-lane road across these steep-sided valleys would have been incredibly expensive, so the client, the UAE Ministry of Public Works, needed an alternative.

Reinforced soil walls were the ideal solution. Not only would they be faster and more economical to build than bridges, but this approach also meant there was a use for the 13M.m3 of Gabbro excavated from the cuttings (which created high-quality aggregate) delivering further savings and reducing the project’s carbon footprint.

A total of 26 reinforced soil walls were built using Tensar’s TensarTech TW1 system with a modular block wall facing. This was faster and more cost-effective to build than cast-insitu reinforced concrete, which can take longer to cure in arid conditions, and than precast panels, which would have required getting heavy lifting equipment into sites that were difficult to access. Instead, blocks could be laid by hand, with between 100m2 and 150m2 of wall face installed on average each day, by multiple gangs of installers working simultaneously at various locations .

We monitored the walls throughout construction and for two years after they were completed using insitu instrumentation, which showed movements were less than 10mm, much lower than predicted.

Tensar's TensarTech Wall and Slope Systems
With over 30 years of construction knowledge, design experience and innovative geogrid products, our TensarTech permanent and temporary retaining wall and slope systems provide a number of facing types and construction options to suit the structure’s end use, location and required design life.

Our retaining wall solutions include precast concrete, dry-laid modular block systems (with the option of adding architectural, masonry or brick finishes); precast concrete panels; gabion and crib walls; and robust units suitable for aggressive marine environments. Our reinforced soil slope solutions can create vegetated slopes with angles of up to 70˚.

For more information about these systems, visit the Soil Retaining Walls and Reinforced Slopes section of our website.

Also, make sure to check out our next Tensar Academy Webinar on the subject of "The Use of Non-Standard Fills in Reinforced Soil Highways Structures" which will be held on 2nd July at 11am BST. Book your place here.