Liquefaction can occur when saturated or partially saturated loose sands lose strength and stiffness due to a rapid increase in pore water pressure due to cyclic loading, such as during an earthquake, causing them to flow.

Loose materials, such as sands and silts, compress when a load is applied. In saturated soils, water fills the gaps between the soil particles, so pore water pressure will increase under loading. As a result, pore water tries to flow to areas of lower pressure, typically towards the ground surface.

If the load is large enough, or if it is applied rapidly or repeatedly (during an earthquake, for example), then there is not enough time for the water to flow between loading cycles. This means pore water pressure can build up until the soil particles are forced apart, causing the soil structure to lose its strength and the soil to start behaving like a liquid – ie it flows Or cause boiling sand if liquefiable layers are located at depths.

Liquefaction results in bearing capacity failure and shear-induced settlement on the edges of a building or structure; this causes curvature of the foundation and can lead to structural damage and, in the most extreme cases, collapse.

A gravel raft, mechanically stabilised with Tensar geogrids, can increase the overall bearing capacity of liquefiable ground and has been shown to mitigate shear-induced settlements of less than 100mm, reducing damage to low-rise buildings. In Christchurch, New Zealand, for example, three stabilised gravel rafts prevented major damage to houses and a supermarket during a devastating series of earthquakes that hit the city in 2011. 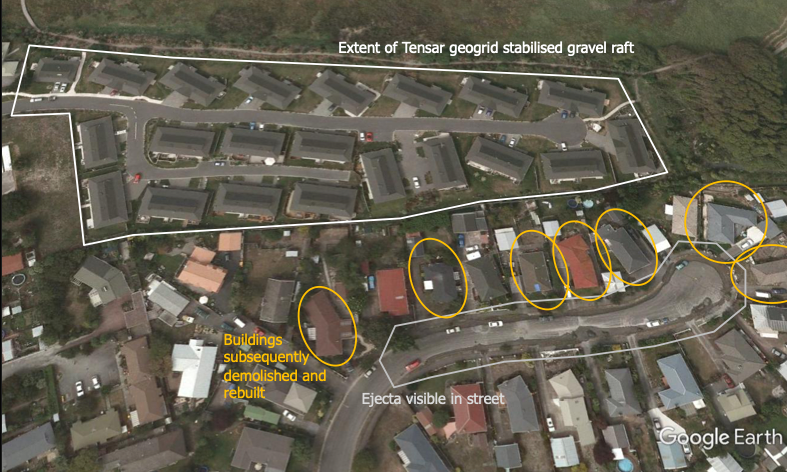 At Sanctuary Villas in Burwood, 21, 1.5 storey homes were built on a 1m thick stabilised gravel raft installed in 2007, over 6m of loose, fine saturated sand. When a an earthquake hit in February 2011, the raft protected the homes from serious damage – only minor repairs were needed – while several buildings in the surrounding areas had to be demolished and rebuilt.

At Streamside Court in Woolston, 49 bungalows built on a 1m thick stabilised gravel raft in 2009 escaped damage when two earthquakes – in February and June 2011 caused liquefaction of the underlying 9m of saturated loose sand and soft silts. While buildings in the area collapsed, only minor cracking of concrete bases and opening of kerb joints was seen on the estate.

A partly-built 0.75m thick stabilised gravel raft being installed for a new supermarket in Ilam, Christchurch, prevented damage to the site when an earthquake hit in February 2011, causing liquefaction of 15m of saturated silty sand and silt. The finished raft also protected the completed building during subsequent earthquakes in June and December that year.

If you would like to learn more about a gravel raft, mechanically stabilised with Tensar geogrids, you can download our information bulletin here.