Land reclamation has been used for centuries to create new, useable land from the sea, lakes and rivers, to provide extra space for agriculture, homes, ports, transport and industry.

There are two main sources of reclamation material: the land or the sea. Either material is quarried and used to fill an area, or it is dredged from the sea or river bed and dumped from barges or pumped through discharge pipes.

At DP World’s London Gateway, for example, 300Mm3 of river bed material was dredged to provide more than 600ha of new port space. And Hong Kong International Airport was built on a large artificial island built by flattening and levelling two small islands and reclaiming 9.38km2 of seabed.

Regardless of the source, this material is often highly variable – from rock, to sands, gravels, silts and clays – all of which have a high settlement risk and require treating before they can provide a stable and safe platform for development. Additionally, the liquefaction potential of these highly saturated soils can be high, an important consideration in seismic areas.

The advantages of building with stabilising geogrids on reclaimed land

As well as short term settlement, the highly variable nature of reclaimed material can lead to long term issues. Constructing earth structures, such as embankments and flood defences, can be an expensive challenge, requiring deep foundations. 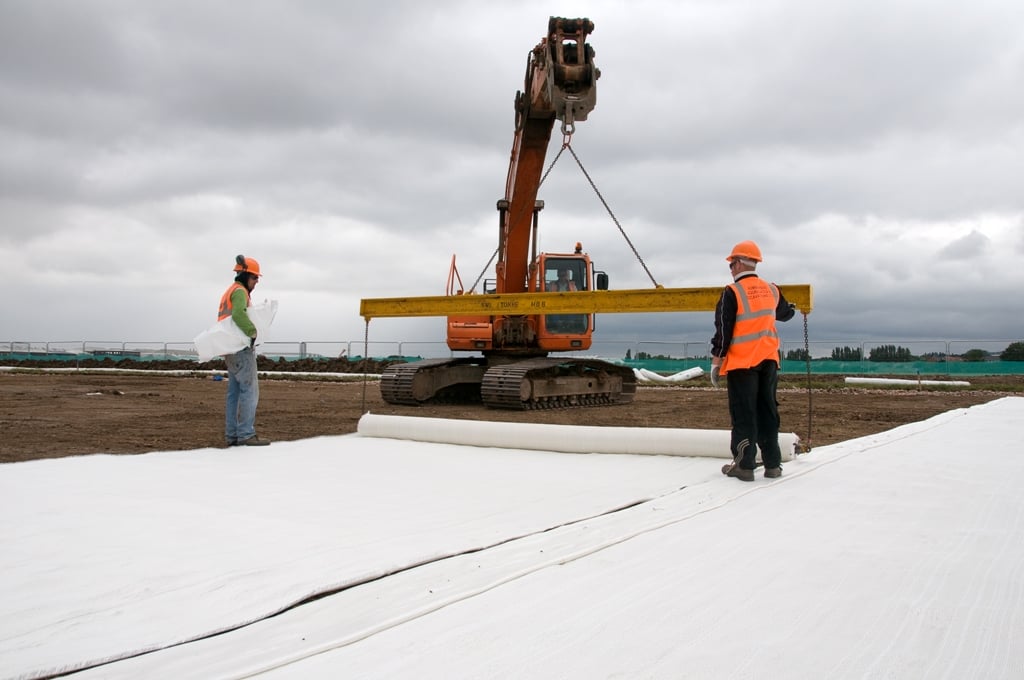 Tensar Basetex being installed on a site in Hull

Additionally, high-strength knitted geotextiles such as Tensar Basetex, can reinforce and enhance the base of embankments, providing additional stability against deep-seated shear surfaces.

Geogrid-stabilised structures can also provide protection against earthquakes. Gravel rafts, mechanically stabilised with Tensar geogrids, for example, have been shown to increase the overall bearing capacity of liquefiable ground.

These solutions are more environmentally-friendly, avoiding the use of concrete and chemical additives; are faster and easier to build, often by hand; and allow rapid place of embankment fill, often without the need for staged construction, saving time and money.

The United Nations predicts that two thirds of the world’s population will live in cities by 2050 (currently it is just over half). As many cities are next to coasts or rivers, reclamation will continue to be one of the primary methods of creating more land to meet increasing demand for space.