Distinguishing between stabilisation and reinforcement is a key consideration for civil engineers when it comes to designing roads and platforms with geogrid.

As I discussed in last week’s blog, the intended use of a geogrid, and how it interacts with the soil and fill layers around it, is far more important than its physical properties when it comes to designing roads and platforms and assessing their performance.

Some geogrids act in tension to provide a reinforcement effect, while stabilising geogrids confine and laterally restrain particles to increase the performance of a granular layer in, or under a road, railway, working platform or other trafficked area. 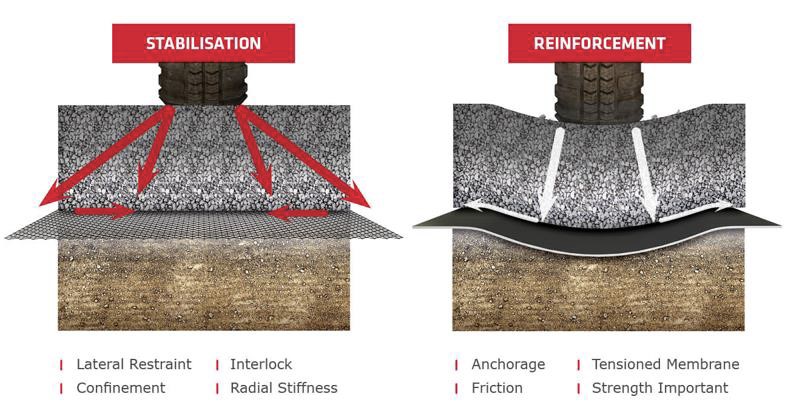 The differences between stabilisation and reinforcement geogrids.

In recent years, certification bodies have begun to recognise these differences, enabling manufacturers of stabilising geogrids to obtain certification, even when the standards on which this certification is based have not considered the stabilisation effect. This benefits both the manufacturers and engineers; certification gives engineers the confidence that the products and systems they specify are fit for purpose and have been through rigorous, independent assessment.

The International Standards Organisation has recognised that the stabilisation function available with some geogrids as distinct from other geogrids where tensile strength parameters dictate performance and apply the reinforcement function. ISO 10318 defines stabilisation as :

Put simply, a stabilisation geogrid interlocks with granular materials under load. The granular particles partially penetrate and project through the apertures and are confined and laterally constrained by the geogrid. This forms a mechanically stabilised layer, which is capable of controlling differential settlement, reducing fill depths, capping weak deposits and increasing dynamic traffic loading and bearing capacity. 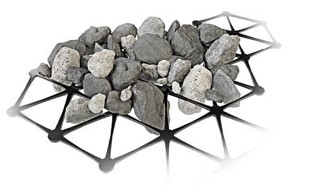 A stabilisation geogrid interlocks with granular particles to create a mechanically stabilised layer.

The improvement of the mechanical behaviour described in the ISO definition is not something that can be derived theoretically. Extensive full scale trafficking trials, as well as extensive project experience, have allowed Tensar to derive product-specific “stabilisation factors” which, when applied to a granular layer, model the stabilising effect of the stabilising geogrid to allow engineers to benefit from reduced granular layer thickness and/or increase trafficking performance, as well as increased bearing capacity where heavy static loading is expected.

Available value includes both monetary and environmental savings to be quantified.

Confirmation of the stabilisation function for Tensar geogrids

The Europoean Organisation Technical Assessment and the associated European Assessment Document (EAD) describes a “Non-reinforcing hexagonal geogrid for the stabilization of unbound granular layers by way of interlock with the aggregate” , and formally recognise the stabilisation function of a Tensar TriAx geogrid. They also recognise that aggregate confinement enhances a granular layer’s resilience, trafficking performance and bearing capacity in, or under roads, railways and other trafficked areas.

Also, make sure you take part in our next Tensar Academy Webinar, The Road to Stabilisation – the Evolution of Tensar Geogrid Technology, which will be held on 24th September at 11am BST. Book your place here.