The benefits of geogrids in trench reinstatement

What are the positive benefits of geogrid stabilisation in roads subject to post-construction utility trenching?

The use of stabilisation geogrids in permanent roads is well accepted. The geogrid will be incorporated either below or within the road foundation or within the unbound structural layers, depending on the function and pavement design needs.

Engineers concerned with managing roads often ask whether the inclusion of a geogrid will cause problems for utilities trenching, either during the excavation stage or for reinstatement. This is not an issue.

Excavation through a Tensar geogrid is quite simple using any normal method – manual or mechanical. The bucket of an excavator will rip through the geogrid without causing pull-out from the surrounding fill. The interlock between the geogrid and the pavement material is too great to enable the geogrid to be dragged by the excavator.

Indeed, the interlock and confinement provided by the geogrid is of real benefit when trenching. Item S3.2.4 of the UK DfT Specification for the Reinstatement of Openings in Highways states the need for “trench walls should be even and vertical with no undercutting of the running surface”. This is to prevent loss of structural integrity in the zone of influence surrounding the excavation. The image below shows surface deterioration extending into the zone of influence adjacent to a trench reinstatement, probably due to the effect of undercutting or loss of structural integrity caused by bulging of the unsupported trench excavation. 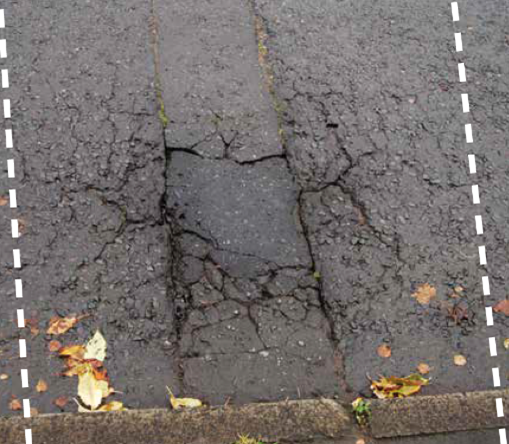 Surface deterioration adjacent to the trench cut, due to undercutting during excavation (Source: www.asphaltinstitute.org)

Undercutting and bulging of the trench is controlled by the inclusion of the stabilisation geogrid. The granular material above and below the geogrid, interlocks within the geogrid apertures and is prevented from moving laterally.

Inclusion of a stabilisation geogrid reduces the potential for undercutting during excavation, thereby mitigating against future surface defects in the zone of influence adjacent to the trench repair.

Reinstatement of the trench must re-establish the structural integrity of the pavement. The reinstated pavement should be capable of distributing traffic loads down to the subgrade as it did before trenching took place and without differential settlement of surface deformations.

If a geogrid has been included in the pavement by design, will trenching through lead to loss of structural support?

Stabilisation by geogrid is a very localised mechanism. Areas adjacent to the excavation are therefore not affected by removal of a section of geogrid. But what about within the trench area itself? If the geogrid is located in the road foundation, i.e. below or within the capping layer, then it has already performed its function of providing stabilisation during construction and enabling placement and compaction of the pavement layers. Loss of the geogrid will have no significant effect on the in-service pavement.

If the geogrid has been included within the structural layers of the pavement – sub-base and/or granular base layers, then the geogrid is contributing to the in-service performance of the pavement. The contribution of the geogrid within the trench area must be compensated for. This will usually be done by simply replacing the subbase material with high quality base material during reinstatement, or by including a reinforcing asphalt interlayer between the binder and surfacing layers. 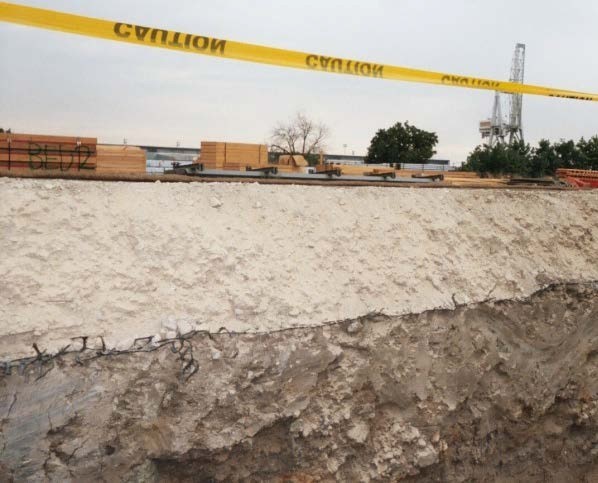 The stabilising effect of the geogrid confines the granular layers, preventing lateral movement into the excavation

Asphalt Interlayers can be used to increase the fatigue performance of surfacing layers in trench reinstatement. Tensar GlasstexPatch comes in 1.0m wide rolls. It has an adhesive bond layer on the underside to facilitate ease of placement between binder course and surface course, or bound base layer and binder course . This complies with Item S12.3.3. of UK DfT Specification for the Reinstatement of Openings in Highways - “Repair of interface cracking”. A stepped joint is used to enable a 300mm lap of the asphalt interlayer beyond the vertical trench face.

Stabilisation geogrids such as Tensar TriAx located within the unbound pavement layers provides a real benefit for future trench excavation and reinstatement.

Asphalt Interlayers, such as Tensar GlasstexPatch can reduce future surface deterioration when incorporated into a trench reinstatement within the asphalt layers.