The shape of things

Research has shown that Tensar TriAx is more effective at stabilising granular layers and improving overall road pavement performance than Tensar biaxial geogrid – it all comes down to TriAx’s unique shape.

Tensar’s geogrids have been used to stabilise granular layers in road pavements for more than 35 years. Mechanically stabilised layers are proven to be a cost-effective way of reducing surface deformation of a road under dynamic traffic loads.

Why Tensar TriAx is more effective than biaxial geogrid 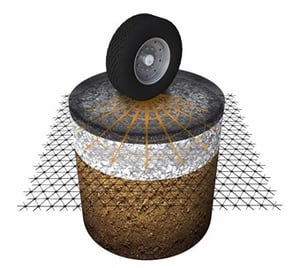 Tensar TriAx was a huge leap forward when it was launched in the UK in 2007. TriAx was introduced following five years of development by Tensar, with performance testing by the UK Transport Research Laboratory. Since then, the benefits of TriAx in flexible pavement design have been demonstrated through accelerated pavement testing by the US Corps of Engineers.

A key finding was that the shape of the geogrid dictates, to a large degree, its effectiveness in responding to the load pattern passing through the road pavement. Researchers demonstrated the load pattern caused by passing traffic is conical, radiating out 360° from the point of contact. So, when the load encounters a geogrid, the footprint is near circular.

TriAx’s hexagonal shape responds more effectively to this load pattern than the square shape of Tensar biaxial geogrid and so is far more effective in improving the performance of the resulting mechanically stabilised layer.

In this 'Keeping you in the know' video, Jonathan Cook explains how the unique shape of Tensar TriAx geogrid makes it more effective than Tensar biaxial geogrid.

Subsequent research, plus more than a decade of successful projects, have demonstrated that TriAx out-performs Tensar’s biaxial geogrid as part of our Pavement Optimisation approach to reduce construction and whole-life costs, increase pavement performance and operational life, and reducing a project’s carbon footprint.

Make sure you take part in our next Tensar Academy Webinar, The road to stabilisation – the evolution of Tensar geogrid technology, which will be held on 24 September at 11am BST. Book your place here.