Geotechnical Settlement: Types and How They Work

The geotechnical settlement of soil occurs when the stresses within it change (for example, when an excessive load is applied to the surface or the ground is excavated to make tunnels). Soil settlement can have catastrophic consequences, such as the collapse of structures supported by the ground.

Use the links below to jump to the sections you’re most interested in:

What is geotechnical settlement?

In geotechnical engineering, settlement is defined as the downward vertical movement of the ground due to changes in stresses within it. Excessive ground movements can cause damage in buildings, structures and transport infrastructure, from bridges and tunnels to road pavements and railways.

Geotechnical settlement is typically the result of loading (from a building or vehicles moving along on a road, for example) exceeding the ground’s bearing capacity. This causes consolidation, where the soil beneath the structure moves vertically and horizontally. Weak and poorly compacted soils are particularly vulnerable.

Settlement can be caused by other factors too, such as changes in moisture content (for example, saturated cohesive soils may soften, drier cohesive soils may shrink), deep excavations and tunnelling, plus the collapse of naturally occurring voids or abandoned mine workings.

Settlement can occur almost immediately after a load is applied or take years, depending on the underlying soil conditions and the cause of movement. 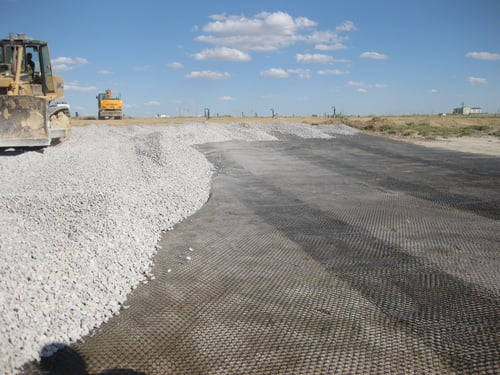 The three components of geotechnical settlement

The overall process of geotechnical settlement is made up of three main components occur at different stages:

These three components are explained below.

Once the consolidation settlement phase is completed, creep settlement begins. This component of soil settlement continues over a long period of time due to the constant pressure of the load – the amount of creep settlement varies depending on the soil type and its anisotropy, as well as the stress history and stress level in the ground.

There are three main types of soil settlement in geotechnical engineering:

These three types and their effects on the structures supported by the ground are considered in detail below.

If uniform settlement occurs, the structure (or road or railway) will settle by the same amount along its length and no damage will occur – although the whole structure will be lower, of course.

Often quoted in specifications to judge performance of geotechnical engineering, differential settlement occurs when one part of a structure settles more (or faster) than another.

If one edge of a structure moves more than another, the structure will tilt – the Leaning Tower of Pisa is a great example – but differential settlement will not cause stresses to build up and so should not cause damage. However, tilting can become unacceptable (in buildings with sensitive machinery, for example) or could lead to catastrophic failure, if tilting is excessive.

If a structure tilts, then a straight line can be drawn between one of its edges to the other. If, however, this line is curved, then this indicates different sections of the structure are moving to a greater or lesser degree.

This curvature settlement can cause distortions in the structure, inducing tensile strains that cannot be sustained by building materials (such as masonry and brickwork) or by road surfacing. Eventually this will lead to damage and cracking (and in railways, excessive curvature can mean trains cannot run on distorted tracks).

Curvature can be expressed by the deflection ratio: the maximum vertical movement, divided by the length of the structure over which that movement is measured. Curvature is therefore a key consideration when assessing settlement performance of structures.

How geogrids can reduce geotechnical settlement

Geogrids are commonly used in granular layers to mitigate the effects of uniform and differential settlement when building on weak ground (although the approach is suitable for any ground conditions).

A granular layer stabilised with Tensar geogrids performs as a composite, due to the interlocking mechanism and particle confinement that develops between the aggregate and the geogrid apertures under loading. By controlling lateral and vertical displacement of the granular particles, this mechanically stabilised layer (MSL) can delay settlement. 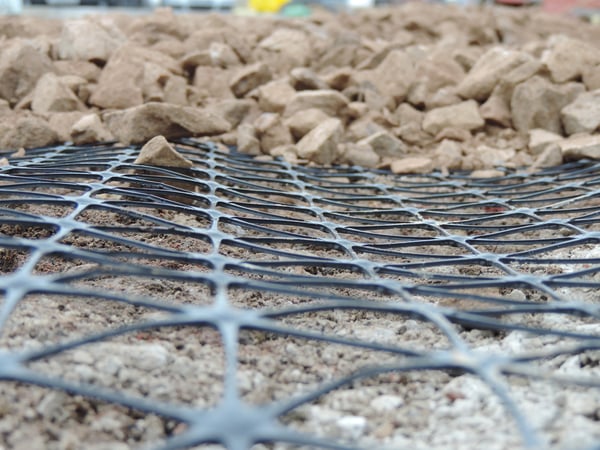 This guide has explained the geotechnical settlement of soil. Along the way, we’ve looked at what soil settlement is, the causes, the three main components, different types of soil settlement and how geogrids can reduce its effects.

Tensar manufactures the most advanced geogrids available, helping to reduce the amount of geotechnical soil settlement that occurs beneath structures. Visit our geogrids page to learn more – or take a look at our applications page to see how they’re used in practice.