What are the different types of road stabilisation?

When weak or variable ground is encountered in road construction, some form of subgrade stabilisation is usually adopted as an alternative to excavation and replacement of the weak soils.

What exactly do we mean by subgrade stabilisation?

In some cases, subgrade stabilisation refers to subgrade improvement where the physical properties of the subgrade soil are modified by the addition of a stabilising component: usually lime, cement, or other chemical agent, combined and mixed in-situ.

Subgrade stabilisation can also describe the process whereby a stronger soil layer - usually a compacted aggregate material - is placed over the weak soil to distribute load to the subgrade and increase bearing capacity, often with the inclusion of a geosynthetic at the top of subgrade level. The strength of an aggregate layer and its load-spreading capacity can be enhanced by mechanical stabilisation of the aggregate material, using a suitable geogrid. In this case the subgrade soil properties remain unchanged, but the mechanically stabilised aggregate layer provides protection to the subgrade and increases load-carrying capacity.

In this guide, we’ll look at each of the most common forms of subgrade stabilisation in road construction: Read on to learn more about:

This technology is known to most earthworks engineers, across the globe. Interestingly, according to the UK Design Manual for Roads and Bridges, DMRB HA74/07, mixing lime into a subgrade soil in the UK is termed ‘modification’ not ‘stabilisation’, although the term ‘lime stabilisation’ is still more commonly used.

Lime is commonly obtained from chalk or limestone, both of which are composed of calcium carbonate - CaCO2. The process of burning calcium carbonate in lime kilns generates quicklime - CaO (often referred to as lime or burnt lime). This process has very high energy and CO2 costs for production. Clayey soils are improved by the addition of quicklime, reducing moisture content along with plasticity to improve workability. The lime is added in-situ and mixed in place using specialist equipment. The strength of the mix will continue to increase for up to a year after construction, but most of the improvement is expected to occur within 72hours. Lime is not suitable for stabilisation of non-cohesive soils, or for clays containing high sulphate levels. Lime treatment is considered as a temporary solution by many engineers. Laboratory classification and reactivity of the soil and appropriate mix design are critical to ensure a suitable site-specific solution. Lime dust from in-situ mixing might affect adjacent properties and local stakeholders, and can be a problem during installation. 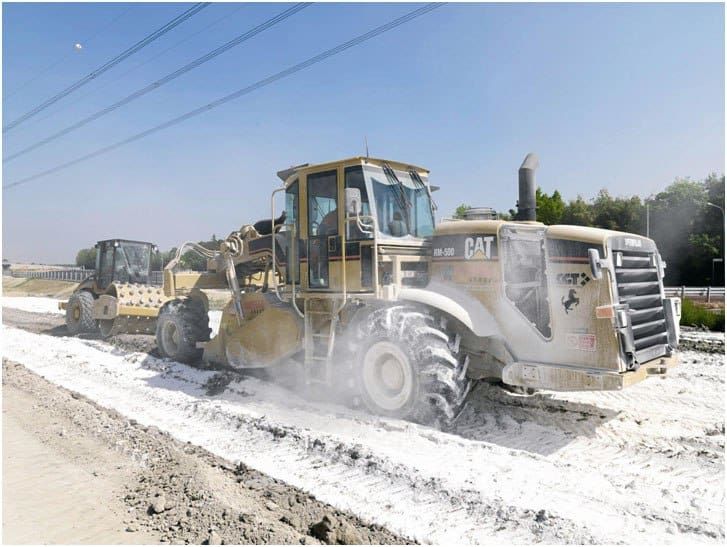 Portland cement is mixed in-situ with the soil, to a pre-defined depth (typically up to 300mm). The cement combines chemically with soil particles to form a stronger material: simply put, it binds particles together.

However, this can be achieved only with the addition of water to activate the cement, adding another stage to the installation process on site. The method is not suitable for cohesive soils and soils with more than 2% organic content, however with help of other binders some issues with these difficult soils can be overcome.
Water content must be closely controlled to achieve the required properties. Like quicklime, the energy and CO2 manufacturing costs for Portland cement are high, as again the process of production entails quarrying, crushing limestone and use of kilns where roasting at 1500°C needs to take place to produce clinker – the principal ingredient of cement mix.

In both temporary and permanent road applications, deformation can lead to cracking of the cement stabilised soil. Deformations must therefore be limited to avoid failures requiring maintenance. Many experienced engineers will admit that for temporary roads application this solution requires maintenance. In some countries it is assumed that chemical improvement of soil is temporary and with time soil strength will deteriorate, the question is how quickly? As with lime, cement dust clouds arising during in-situ mixing can be an issue affecting adjacent properties and local stakeholders. 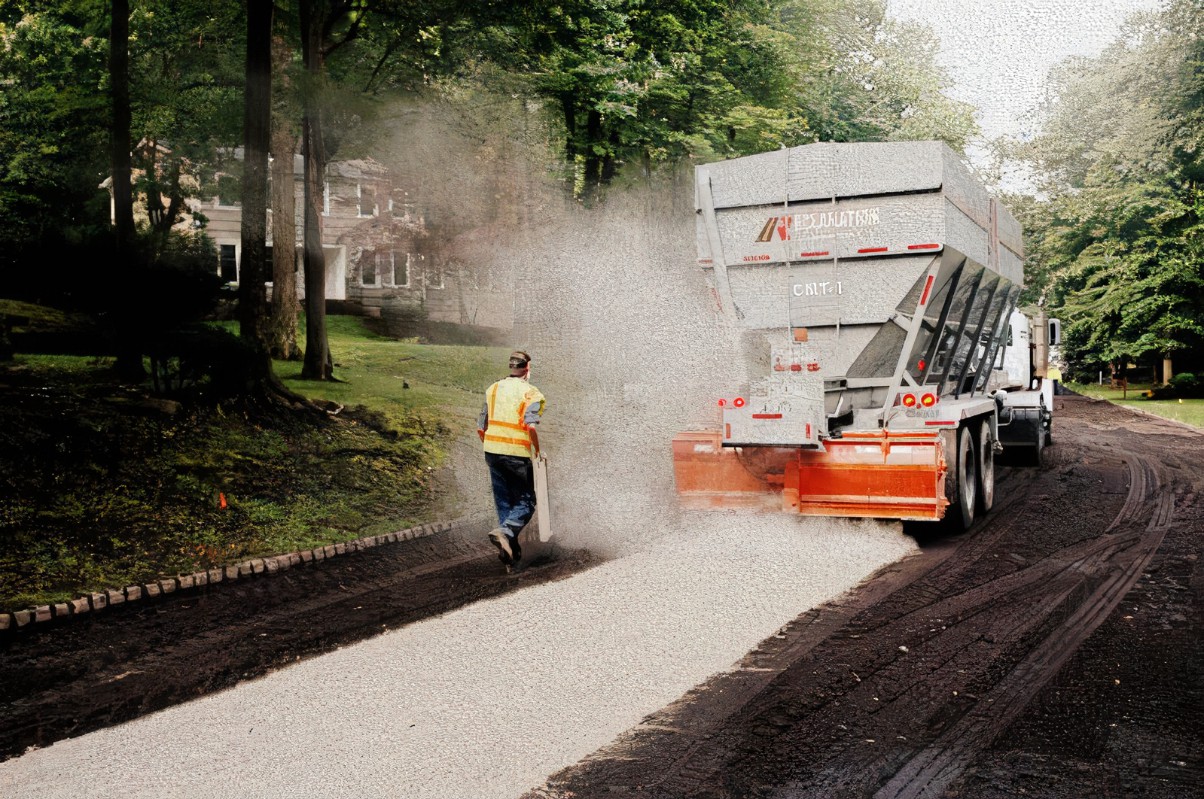 Less commonly used are synthetic polymer or biopolymer additives. These are often proprietary agents with limited independent research to verify performance. They are typically more suited to granular soils with higher fines content. Whilst in some cases they may potentially offer a more environmentally friendly solution than lime or cement, they often higher cost alternatives.

The properties of mechanically stabilised layers for a range of aggregate types and Tensar geogrid grades have been characterised by extensive testing. Design parameters have been defined and these have been validated by full-scale load testing and trafficking tests.

With suitable installation techniques, this technology can be utilised on extremely weak soils. Unlike chemical stabilisation technologies, this solution does not require specialised equipment or trained site staff. The increased strength of mechanically stabilised layers allows thinner aggregate layers to be used over weak soils, reducing imported materials cost and associated CO2 emissions. 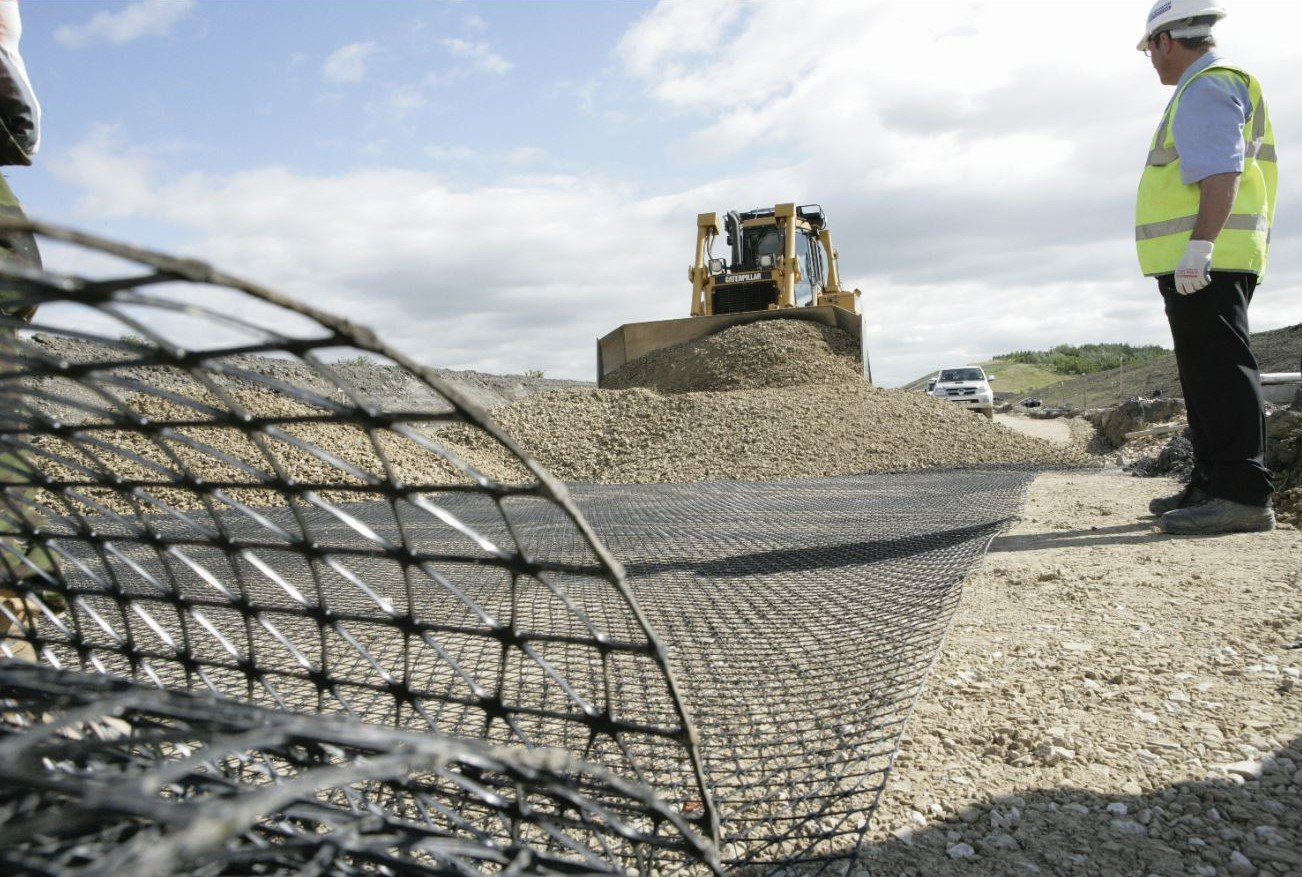 Want to find out more about how Tensar can help?

For more than 30 years, Tensar’s innovative ground stabilisation solutions have proven ideal for many kinds of construction and subgrade improvement projects, including paved and unpaved roads, car parks, airfields, heavy duty pavements (such as container ports) and working platforms.

Click here to find out how we can save time, cost and carbon on your next project!