What is a landslide?

A landslide is the movement of a mass of earth, rock or debris down a slope, under the force of gravity: the self-weight of the material wanting to fall down. A landslide can take the form of material falls, topples, sliding, spreading or flows (mudflows or waste flows).

Landslides are not uncommon, occurring in all regions, across the globe, with varying degrees of severity. Many are minor slope failures with minimal consequences and even local people may be unaware of the incident. At the other end of the scale are humanitarian disasters involving catastrophic loss of life and destruction, and in between are a variety of landslide types, including both minor and major failures, resulting in differing degrees of damage to buildings, property, business and the population. A clear example of this is in the video where the landslide led to a house being condemned. Landslides are usually a result of a combination of factors and can sometimes – though sadly not always – be anticipated and thus avoided, by preventative engineering work.

What causes a landslide?

Different soil types can support different slope angles. The maximum stable face angle depends upon the internal strength of the soil and the forces acting on it. Some slopes that have been stable for many years can suddenly fail due to a trigger mechanism such as a change in soil strength or surcharge loading. In general, there are three key factors which can lead to a landslide: weight, angle and strength.

Water plays a part in many cases and is actually the most common cause of a trigger mechanism. It increases the loading due to hydrostatic pressure while at the same time weakening the soil. An increase in water can originate from natural causes, burst water mains, and other human related activities.

Another key factor is geometry. Erosion or excavation can both increase the effective slope angle, causing a slope to become too steep to stand.

A slope’s strength can be impacted by the removal of vegetation, weathering – where a material’s strength is reduced due to freeze thaw cycles and mineralogical changes – and water, as mentioned above.

The easiest way to prevent a landslide is to avoid building in areas that are – or might become – prone to landslides: but this is not always an option. In such cases, there are measures that can be taken to reduce the potential for a landslide, where an assessment has shown that conditions for a landslide exist.

Surface drainage can be installed to re-route surface water away from a slope, thus reducing the likelihood of the soil being weakened. In high rainfall areas, erosion protection – both at the toe and on the surface – can be very effective, positively impacting the maintenance of the angle of the slope. An alternative option is almost the opposite of this, where removing material from the top of the slope or adding a toe berm, can reduce the effective slope angle and loading, thus increasing the factor of safety.

Ultimately, the only way to increase the strength and stability of some slopes is by major engineering works. Several options are available including soil nailing and earth retaining structures.

Construction of Steep Slopes - That are safe

Sometimes it is desirable to construct earth slopes or embankments with steep faces, which reduces land take and is lower in cost than constructing vertical retaining walls. The steep slope can be made stable by the inclusion of soil reinforcement in the form of high strength geogrids. Tensar have developed systems for the design and construction of reinforced soil slopes up to 70° face angle: TensarTech Natural Green and TensarTech GreenSlope. 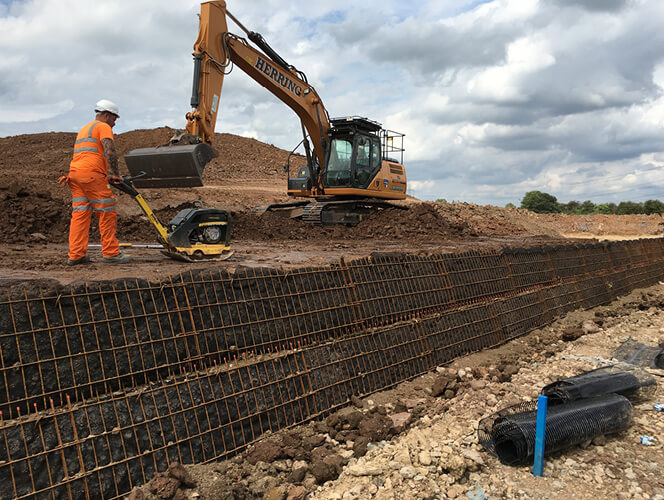 Slope failures affecting infrastructure are not uncommon, as road and rail embankments can slide, and steep faced cuttings in soil and rock can fail. Where slides occur in embankments or soil cuttings, the failed material is often removed from site and replaced with a material that has greater strength – usually quarried rock or aggregate. This is expensive and disruptive, and clearly not ideal. 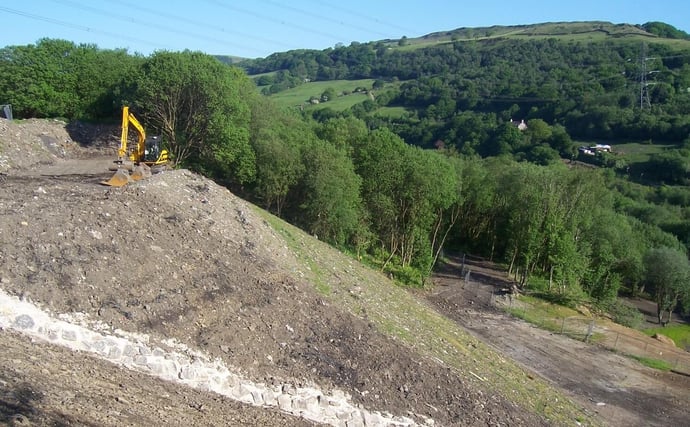 An alternative approach, first introduced in the 1980’s, involves re-use of the failed soil material but with the inclusion of soil reinforcement in the form of Tensar geogrids. This solution has been widely used across the globe for reinstatement of failed slopes in highways, rail and other infrastructure works, both in urban and rural areas. The TensarTech Slope Repair System includes design advice and support from Tensar’s experienced design team.

Got a burning question about geotechnical engineering?

Why not drop us a line at academy@tensar.co.uk and the answer to your question may feature in a future episode of Ground Coffee!